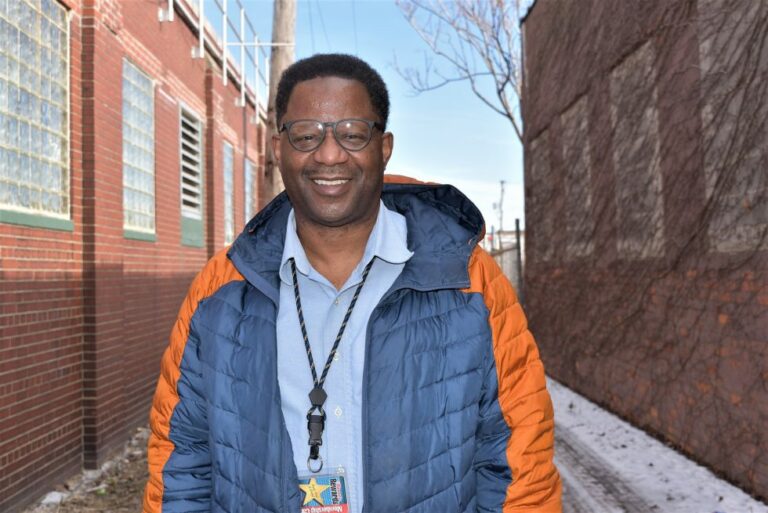 The residents often swarm around Terry as he walks through the halls. He is generous of spirit and is connected with social service agencies across the city. They know he is the one to go to. He grew up in a chaos that lasted 40 years. Yet, he met some extraordinary people along the way who helped him in the slow process of building structure in his life. For the past 7 years, 2100 has given an annual award to one staff person in honor of Terry. It’s called “The Terry Vaughn Compassion Award.”

My father was a lieutenant in the Black Nationalists. I know it’s unbelievable but he was. He used to come get us at times and dress us up in fatigues and march us around Longwood Plaza. But eventually my Grandmother had to have a police escort to get us up out of the Projects because they were trying to kill us.

The worst time for me was when us kids, 4 brothers and 1 sister, went out to Marysville to visit my mother. She looked good and picked up weight. But having to leave her knowing she couldn’t leave with us was hard. They’d always have this country song playing on the car radio, the way down and the way back, Delta Dawn, What’s That Flower You Got On. I remember that along with the experience.

Always a bunch of trauma

The Projects was the worst place we could have lived. Before we arrived, all of us kids had Schwinn bikes, all of us had them. The first day we got there, they stole our bikes. You know, that hurt. That really hurt. We hated being there. I used to run away from George Washington School and try to go to my old school on White Avenue. They would call my grandmother to come get me, take me back home, you know.

I was scared all the time, being in the Projects. We used to live over on Lexington near Hough. My grandmother wanted us out of there because it was right after the Hough riots so it was rough, a little bit rough over there. Rev. Fuller of Mt. Herman Baptist Church over in the Projects – he had a hookup with CMHA and the rent was 1/3 of income so it was manageable to get a place big enough for our family.

But I remember going to George Washington Carver over by Hough. I was more active in school. It was like I had fun in school…it was during the fun time. I was in choir, in band, I was active in theater. I even wrote a letter to President Nixon. News cameras came out because Nixon sent a letter back. At that point I thought my life was going to go somewhere, you know?

I used to baby sit for a guy named Steve and his wife. One day him and his wife come back early and they paid me. She told me to go on my way. I saw the husband Steve go out there with his big, long rifle and shoot one guy and chase the other one down and found out he shot that guy too.

Charles See and the Friendly Inn

It was a little different time. The police wouldn’t just storm down there. There were so many people with guns. The people that got shot were in this gang called the Ambrose. They were all up on top of the Friendly Inn where Charles See worked. I remember Charles See then. He had this giant afro. He was the Director. I was a little kid so I don’t remember having a lot of conversations with him but everyone knew who he was. They had a puppetry class. They taught us how to make marionettes there. Just a lot of fun, it was a good center.

Why was it a good center?

Terry makes it sound like this was something really rare…an adult doing something with kids.

The teachers there made an impact on us, you know? They did stuff to try to keep us out of trouble. As a matter of fact, it was the only place we could safely have some fun, you know? Because they had some respect, the gangs, for Mr. See, they wouldn’t run up in there. I was so little, and Charles See was bigger than life.

I was in the Penitentiary twice, once in Mansfield Reformatory. It’s a really dim, dark place. They use it in a lot of movies like Shawnshank Redemption.

When I finally went to grownup’s prison at 18, I had so many cases and so much petty stuff, that when I got to the Justice, they sent me away. I don’t remember having a trial, I don’t remember working with a lawyer, none of that stuff. They did it a little bit different back then.

To be honest with you, I was a silly kid. I didn’t take nothing serious. I couldn’t believe they would make you work. I used to go to ‘the Hole’ so much because I didn’t want to work. I just did not fully acknowledge how much trouble I was in, you know?

It’s the basement with cells. You had to stay in that cell alone. Only your t-shirt and shorts on. That isolation was something else. But you know, I was stupid back then.

When I finally got out of prison, I had a problem getting a job so I put an ad in the paper, ‘Young man will work any hours.’ I got some crazy calls, but I got one really good call. From Albert and Francine Snyder. They had a house up on Fairmount and Cedar. Giant houses. First time I’d actually seen a mansion.

Terry’s voice calms, and with a gravity as he is closing in on something so special…

Through the Snyder’s, they helped me with race issues. I would have never been exposed to something like that. They were down to earth – they had a lot of money but they were down to earth people. “Mom and Dad” is what I called them, you know? They would take me to Canada, on Perry Sound they had cabins up there. He showed me how to do plumbing. He had two buildings up on Lake Avenue, him and his brother owned together. He taught me a lot of stuff.

Even when my addiction got heavy, he still took me in. He helped me buy my first house, my first car, you know?

Albert and Francine Snyder, they really impacted my life, they changed everything about me.

Ever since, I haven’t wanted for nothing. You know when God puts someone in your life because it just doesn’t make sense, you don’t deserve it, but there it is.

I skipped some of the story where I worked at Volunteers of America. I went through their program, was a Monitor there, then did their Street Outreach. I got a lot of knowledge and resources from doing Outreach at VOA. That’s where I first learned the importance of these community connections. That’s when I met so many who have shared in this work. People like Ruth Gillett, past Executive Director for the Office of Homeless Services of Cuyahoga County and Mark Budzar, an outreach counselor at VOA then, and later an Administrator of the Office of the Public Defender and some other positions.

You were a resource person even then, building off of this ever since.

When I come here in the mornings I want to do everything I can do. There’s a moment when I try to check myself of anything that would get in the way of being as effective as I possibly can. Because there are times when I feel overwhelmed, because there is so much need. You know? I hear, Terry, Terry, Terry, 30,000 times a day. Sometimes I get frustrated because I can’t do everything. I wish I could, you know?

Go through some of the things you assist guys with because you are like the go-to guy even for staff.

Well, birth certificates, identification, social security cards, applications, food stamps. I help with the housing applications; advocating for funds; different approaches toward housing. I’ll advocate to think outside the box to find housing for residents. That’s what I like about working here, because it leaves you some space for creativity and you have the support from your superiors, you know? (Laughing) They’re crazy too, just like me! Anything that is humanely possible to get guys housed that is legal.

Sometimes, it’s my work to just have conversations with residents, you know? I get a lot of phone calls every day from past clients just trying to make it through the day without picking up. People frustrated about this, that and the other; just needing someone to talk with, you know? Maybe they have their place, but they started using again and don’t want to lose their place, “How can you get me into treatment, Terry?”

I got belief, real belief, that things can change

Yeah, and I’m not successful every day, I make mistakes, you know? But I don’t want to be in the way of somebody getting help or making someone feel they can’t come to me. 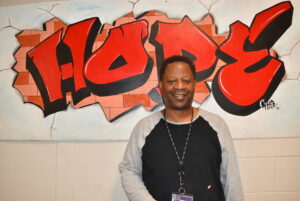 When I look in this place, I see myself. I know how you feel, I know how it feels to get the help, or when someone is honest with you…Got to be honest with people.

I realize Terry is modeling hope, honesty and stability, what he wanted from the parents who were absent in his life.

I know how it feels to not really trust adults because they’re not taking care of their business with you, not being responsible. Being hungry as a kid. I know what it’s like to have no parents, you know?