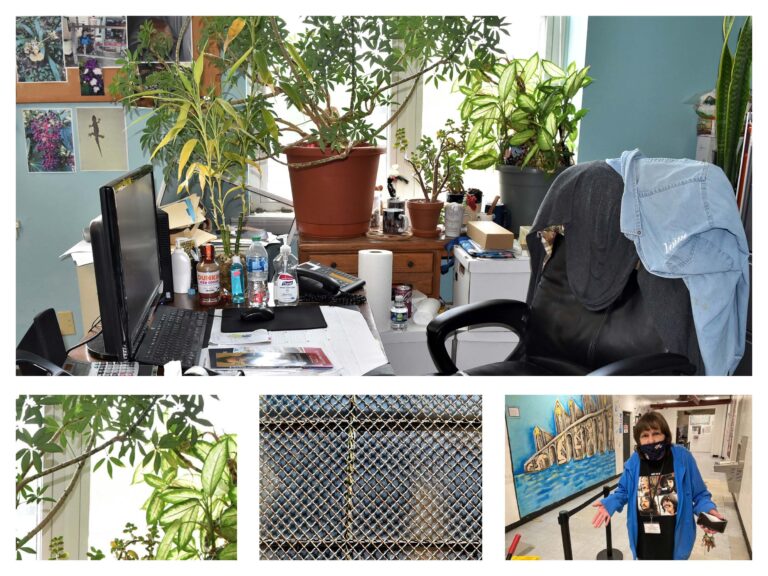 Surrounded by plants at her office desk, Kathy leans back in a relaxed pose – an inviting way of allowing shelter residents the time they need. I’ll see the resident’s face soften, shoulders less hunched; less in a hurry to get out what is so important, what needs to be said. I  sense Kathy knows herself well and this shows in her patience. There’s nothing shallow about Kathy. She’s not about being “nice” or being a “good” person. She understands it is necessary to be directly honest in order to help a person. But it’s with her sensitivity to timing so as to not demean the other person. Maybe this comes from her own transformation over the years with the help of a few mentors. Now Kathy mentors many, staying in touch with some of her clients for as long as 15 years after they’ve moved out of the shelter.

When I was homeless back in 1984, you went to a shelter for 6 weeks, then you needed to move on to another shelter for the next 6 weeks. At that time, shelters were more like warehouses. There was no real case management – instead there were house mothers, chores, camaraderie, but getting out of the cycle was a lot harder. If it were not for a beautiful lady named Maura who was my case worker at Cleveland Treatment Center, I don’t know if I’d be alive. She was the one who got me back in housing.

What was it about Maura in particular?

I think I have PTSD from being homeless. It’s terrifying just trying to find a place to get in for the night. Terrifying when you don’t have any money, nowhere to go, no family in this city, snowing, you got to get somewhere. You don’t have money to ride a bus all night. The only thing you can think of is “I’ll break the law and go to jail.”  You’re totally powerless.

Once Maura helped me get back into housing, I still had a period of time before I got sober and decided to do something different. I started out working in chemical dependency but I think I gravitated toward housing because I had that experience of being without a home burned into my memory.

A Moment of Awakening 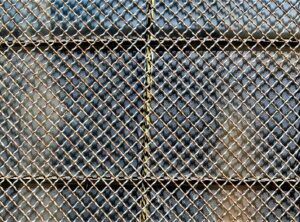 To get off the street I stayed at Salvation Army’s PASS, the old women’s shelter. It was a shock. I remember walking into Room Four: grates on the window, linoleum floors, this tiny room, and it was cold, extremely cold. I had to shower and shared the area with 2 other women, strangers. I said to myself, “Oh no. No way.” It had shock value. I knew I had to get out of there soon.

(The Salvation Army PASS Program provides transition housing and case management to help with skill development, sobriety, income, permanent housing and self-sufficiency. This was originally a program for women, but now it serves men experiencing homelessness or coming out of the criminal justice system.)

That experience of homelessness has helped me to this day. Unless you’ve been there, you can’t possibly know what it’s like to have no hope of anything. I think a lot of the guys here have no hope. I know how hard it is for these guys who walk around here at 2100. Some of them don’t have anything…don’t have a penny. Functioning like that is really hard. And I think that connection led me into working with housing as a case manager. 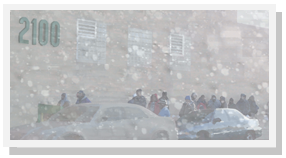 I think this is why I also give so much energy to “Walker Mart,” supplying stuff for guys apartments. Guys go into housing with nothing- I know what that’s like.

(Volunteers donate supplies to what Kathy calls Walker Mart, so residents move into an apartment with essentials such as dishes, sheets, soap and toilet paper.)

But I’m getting ahead of myself. In 1984, I moved into housing with no income. I had to scramble like hell to make sure I was never homeless again. So, I know people need income to make it once they have a place of their own.

I started working for Salvation Army’s PASS Program in 1999. PASS was very good to me. I started out as a secretary, then an administrative assistant, then a case manager. I got my Chemical Dependency I license while I worked for PASS.

What was it that changed you, led you to helping others?

Joanne, a case manager at PASS. She was my friend. When she became a case manager, then that’s what I wanted to do. She made an impression on me, how she helped me. I wanted to be like her and help others. I wanted to help people get out of this hell called homelessness.

Then in 2007, I became the Housing Coordinator at 2100. We’ve done a lot of social service trainings here at LMM. I rely on my experience, the contacts, people I’ve worked with over the years. I know the agencies I can rely on. I have this network of providers I work with. So, if I don’t know an answer, I’ll talk with someone who does. 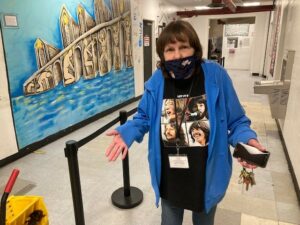 Here at 2100, I see a lot of the clients look after each other and protect each other. But, I’m also seeing some of the younger one’s prey on the older ones. It’s very violent out there. People are being killed for no reason at all. That’s why I think it’s even more important to help people get into housing. Permanent Supportive Housing (PSH) is a God-send because it is working for so many people who can’t live on their own without some kind of support.

The aftercare also helps with that. You can prepare the men with a class, you can prepare them with Walker Mart, but once they’re in the apartment – that’s what separates the men from the boys. If they’re not linked with an agency, and even if they are, sometimes the workers are too overwhelmed to give them the extra help they need. But if they have ONE person to help them with housing concerns, I think it helps. I realized a lot of people don’t have the slightest clue of how to live independently.

Like me, I think the majority of the guys here have PTSD from being homeless. Imagine these guys in here, when they get in the shower they got to know where their wallet’s at, where their phone’s at, or they lose it. And then there is the requirement for them to live by the rules and schedules of 2100. When you’re homeless, somebody else is always in control. At PASS, I’d sit down at 10 and the TV goes off. I’d have to go to bed. Others are in control of your life, but they have to be. If we didn’t have that here at 2100, it would be anarchy, it would be insane. But to the person going through it, it’s traumatic.

Then, imagine someone who’s worked all their life, gets laid-off, loses their house through no fault of their own, and ends up here. They’re like deer in headlights, thinking “Now, how do I get out of this,” but their mind is like pieces of a puzzle that’s coming undone.

There’s also the crime going up in Cleveland and mental health being such an issue. It gets people stuck. We don’t have enough mental health services, and there’s so many individuals living between being helped and being institutionalized. They sit right on that line. Not within probate range but almost. So, 2100 is the place they stay but, really, they should be in a place to better address their mental health needs.

This has been my progression into acceptance. I can’t help everybody, but I can treat everyone with respect. That’s one thing they don’t get. Out there on the street they’re not noticed. They’re not seen, and they’re certainly not respected. I think that’s important, to show people you care. At the very least, they know they have someone they can come talk to who they trust. It opens the door a little bit to say, “If you ever want to talk….”

Like this guy here now. He’s 80 years old and resistant to housing. I tell him, “If you ever want to talk, we’ll talk.” Just leave that door open. “If you need anything, here’s my number…give me a call.”

Kathy laughs describing this client with affection. He’s like a fucking mule. Digs in his heals. Every time he’s eligible for PSH (Permanent Supportive Housing), he turns it down. Numerous caseworkers have worked to get him PSH. Do you know how hard it is to get PSH? But I keep the door open for him- and for all of them. I go downstairs to check on him. He’s in his bed more than usual. Usually he’ll rail against me when I ask how he’s doing. But this time he’s quieter. NOW I’m concerned. I’ve got to go back and check on him. I call him Mr. Cantankerous-I-Don’t Want-Housing. I’ve gotten to know him well in the past year.

Kathy reflects and says again… He’s quieter, that concerns me, I want to know what’s going on. Dr. Siedman is here today in the Metro Health van. If he won’t see Siedman, I’ll have to do a clinical referral.

3 weeks later this client is finally in a nursing facility. This feels like a landmark achievement for Kathy and the other case workers who made it happen.

I’ve learned a lot about clients just by talking with them. Just like I learned what it’s like to be gay from a client who is gay. I used to bring him meditation materials which he read for centering himself. He had a psychiatrist, but one day he came in to tell me he had a new psychiatrist who thought being gay was a learned behavior. That’s when he broke down and cried. He told me “I would give anything not to be like this, but this is what I am.” Everyone comes with their own identities, their own ideas, their own fears. But, if we listen to people, we learn what’s going on. We learn what’s in THEIR heart.