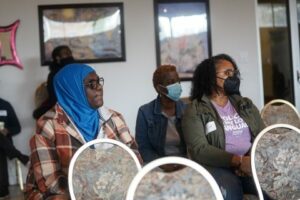 As part of Reentry Week, LMM hosted the first ever People’s Reentry Assembly on April 30, 2022. The program was a community-wide effort, spearheaded by the Greater Cleveland Reentry Leadership Coalition’s Advocacy and Policy Committee which is co-chaired by Margie Glick, LMM Advocacy Director, and Maria Smith, Supervising Attorney at the Legal Aid Society of Cleveland.

This half day program was the result of several years of discussion and planning by the Advocacy and Policy Committee.

The Assembly began with welcome remarks by Margie and Maria, which were then followed by the sharing of stories by three returning citizens who now advocate regularly for a reduction in collateral sanctions: Heather Pederson (Edwins Leadership & Restaurant), Lana Mendis (Towards Employment and LMM), and Mike Jones (Building Freedom Ohio). Following their inspiring and heartfelt stories, attendees split into three groups to begin the working portion of the day.

Each group covered a housing related challenge that was raised during one of the six “community conversations” that predated the Assembly. Five organizations including LMM, hosted one to two conversations with returning citizens they serve or work with. These conversations, which allowed attendees to share their own personal experiencing looking for housing post release, helped Assembly planners gain an accurate understanding of the current challenges facing returning citizens, and prioritize the program’s topics of discussion. 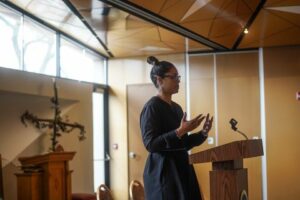 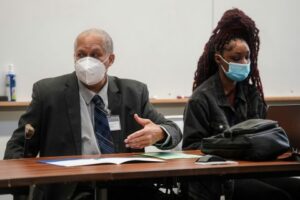 Maria Smith and Kris Keniray (Fair Housing Center for Rights and Research) led a conversation about the importance of Fair Chance Housing, and how passing an ordinance that limits, how and when past justice involvement can be used in the housing search process, could lessen discrimination based on criminal background. Such a solution could also lessen the need for other possible housing solutions, as this issue is such a prominent and common barrier for returning citizens.

The second breakout group led by Josiah Quarles (NEOCH), Sharyna Cloud (Enterprise Community Partners) and Chloe Sudduth (NEOCH) covered the topic of affordable housing. Even with a Fair Chance Housing Ordinance, the current shortage of affordable housing will continue to leave renters in crisis unless clear solutions are identified. This conversation covered topics like universal basic income, shallow-subsides, Source of Income protections and expanding the availability of affordable housing through low-cost homes.

The third breakout group addressed a diversity of issues under the tent of a Renter’s Bill of Rights. This reflected the numerous challenges facing renters with past justice involvement like cost of application fees, which can accrue to the hundreds of dollars following repeat denials. Erika Anthony (Cleveland Votes) and LaShon Sawyer (Towards Employment) led this conversation which included topics like universal rent control, the need for landlords to be educated about renting to returning citizens and the importance of enforcement when creating a Bill of Rights for it to be truly effective.

The day concluded with motivating remarks from Damien Calvert (Building Freedom Ohio). The nearly 45 attendees left energized and ready for continued engagement in these important conversations. The hope, moving forward is in partnership with attendees, to develop a policy agenda, to expand the pool of advocates who engage in these, and related conversations, and to advance policies that lessen the barriers facing returning citizens.

A special thank you to EDEN for providing breakfast, Enterprise Community Partners for providing lunch, and the Office of Reentry for providing bus passes for attendees. This event was part of the 2022 Cuyahoga County Reentry Awareness Week. 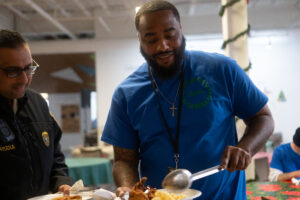 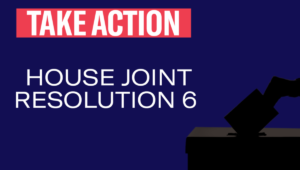 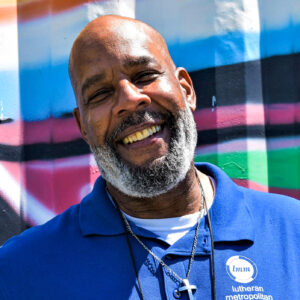